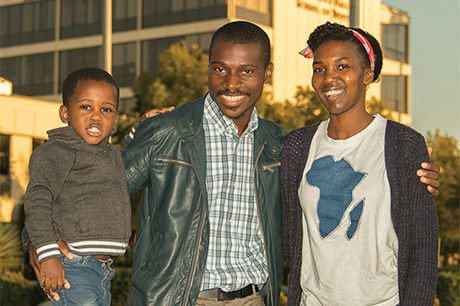 If miracles are manifested by a sequence of improbabilities, Nsekwa Siwale and her husband Jones Simamba have been the beneficiaries of a kind Providence—at least that is how they see it.

The Zambian couple was married in April of 2014 at the Seventh-day Adventist Church in Lusaka, the country’s capital (elevation 4,196 feet), and have a two-year-old son, Shemaiah.

L-R: Shemaiah, Jones Simamba, and Nsekwa Siwale stand in front of the LLU School of Dentistry.

Nsekwa and Jones were raised in different parts of the country—both by Christian parents, but in Jones’ family, by Seventh-day Adventists.

The young people met while attending college on adjacent campuses in Lusaka, Zambia’s capital. Nsekwa earned a three-year diploma from Evelyn Hone College in biomedical sciences and works as a laboratory technician, while Jones completed an accounting program that qualified him for his work as an accounts clerk.

One day in 2010, while the two students were attending their respective colleges, Nsekwa’s older brother Njavwa, who had become a friend of Jones, brought home some DVDs that featured an Adventist minister. It wasn’t long before the siblings decided that “the truth was the truth” and were baptized as Seventh-day Adventists. Meanwhile, Jones and Nsekwa became acquainted at SDA Impact meetings that support Adventist youth and their outreach efforts. “That’s where Jones saw me and where we became friends,” says Nsekwa. “Jones loves to preach and gets invited to do that at different places, especially at schools. At times he would invite me to go along so we could be together—sometimes on hospital visitations where we would pray with patients who are willing. He was a great friend and you could tell he was interested in spiritual growth, and I liked him for that.”

As Jones recalls it: “In time, we thought God had paired us for a reason, not just in ministry,” he smiles.

Life had been moving in positive directions for both students, except that Nsekwa continued to be bothered by a painless swelling in her left lower jaw that began in 2009. Her dentist did not know what the problem was and removed one premolar. For a time it seemed to help, but the swelling returned, and she was given a series of antibiotic treatments at a hospital that provided no solution. Then doctors at another hospital took a biopsy and discovered an ameloblastoma—a rare, benign but aggressive tumor that develops most often in the jaw near the molars. An oral maxillofacial surgeon at a government hospital removed nine of Nsekwa’s teeth and a significant amount of jaw bone that he replaced with an insubstantial wire.

"I'm grateful to Dr. Herford and the Loma Linda University
School of Dentistry. . .  It is not an easy thing to lose most of the teeth in your mouth when you're young."

Through their work, the couple had become friends with NASDAD member and School of Dentistry alumnus Paul Yoo, DDS’08, who was the director of the Adventist Dental Clinic in Lusaka (his wife, Janie Yoo, MD’06, was manager of the adjacent Adventist Lusaka Eye Hospital). He took an interest in Nsekwa’s mandible saga and suggested she come to his clinic so he could evaluate the condition in which the surgery had left her.

Dr. Yoo was troubled by what he saw on the x-rays, says Jones, who recalls his insisting, “‘I will not let you be like this. I will have to do something to help. Eventually your face will collapse because this wire does not give adequate support.’ And that’s why Dr. Yoo got in touch with the people at Loma Linda University, where he had studied dentistry and had friends like Dr. Ashish.”

On receiving the panoramic radiograph from Dr. Yoo, Dr. Sharma said, “We were shocked to see a K-wire [Kirschner wires are used to stabilize tissue during orthopedic surgery] connecting the proximal and distal segments of the left mandible and symphysis,” the line of fusion that marks the union of the two halves of the lower jaw. 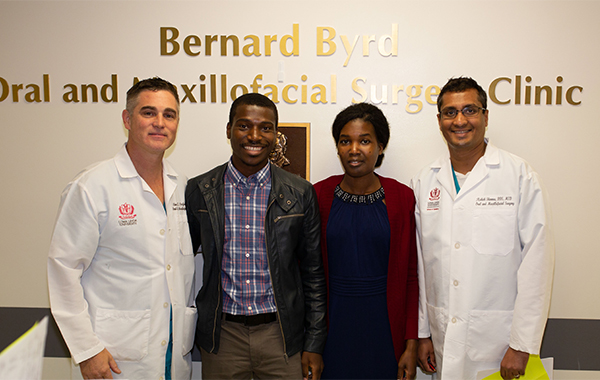 As they evaluated Nsekwa’s pathology report from Zambia, Dr. Sharma said that he and Dr. Herford “were surprised to note residual ameloblastoma still present. I had never seen anything like that before and discussed the possibility with Dr. Herford of reconstructing Nsekwa’s mandible using a heavy titanium plate and screws.”

Dr. Herford believed it would be most prudent to remove “the residual ameloblastoma and immediately reconstruct the left mandible and symphysis using Nsekwa’s own hip bone and bone allograft particles in one surgery.” As Dr. Sharma explained, “This would save her multiple trips from Zambia to Loma Linda, as well as enable future dental implant and implant- supported prosthesis to be placed in her left mandible and symphysis.”

Through the networking of Dr. Sharma, Nsekwa was approved for international benefit patient care at Loma Linda University Medical Center to receive a resection of the remaining tumor and reconstruction of her hollowed-out jaw. “The opportunity to help this young woman and her family, especially with the surgical training I am receiving, stimulated my interest,” says Dr. Sharma.

“When I first examined Nsekwa’s radiographs I was concerned with what looked like residual tumor still in the lower jaw,” says Dr. Herford. “She was left with nearly half of her mandible missing.  After hearing her story, I agreed to take on her case.”

To Jones that news was “like a new day opening up. It was a miracle.” He said, “Dr. Herford was open and kind enough to sit with us and explain the condition and the surgery and the procedures he was planning to do and what it meant.” The couple had been hoping that the repair of Nsekwa’s jaw could be accomplished with one surgery, thereby limiting significantly their time away from home. “And before we asked,” Jones recalls, “Dr. Herford said, ‘I think I’m going to do stage I and stage II at once.’ That was a miracle for us.”

Upon examination, Dr. Herford noted that “the remaining portion of her jaw had scarred and collapsed resulting in her inability to chew effectively or even speak well. She could not bite her remaining teeth together.”

“Nsekwa’s surgery went well,” Dr. Herford says. Using donated titanium plates and screws, and her hip bone grafts, he accomplished the resection and reconstruction of Nsekwa’s mandible on February 6 at Loma Linda University Medical Center East Campus Hospital. “During the surgery we removed the remaining tumor and then began the reconstruction of her jaw,” Dr. Herford explained. “A large portion of bone was harvested from her hip and used to replace the missing bone that had been removed with the tumor. We were able to restore her jaw so she could open and close and bite again.”

“I’m really, really grateful for all that Dr. Sharma has done in working out help for everything that we needed,” says Nsekwa, still in healing mode. “He didn’t know us. He had no idea the kind of people he was dealing with, but he really did everything that he could. I’m so happy that we were accepted at Loma Linda University to get my face reconstructed for which I’m really grateful.”

“I’m grateful to Dr. Herford and the Loma Linda University School of Dentistry. I feel like I’m being given a second chance at life. It is not an easy thing to lose most of your teeth when you’re young.  My situation seemed so hopeless, and I felt very helpless. I’m truly grateful for what they have done for me.”

Nsekwa received follow-up visits for the next three weeks while staying in the home of William and Pamela Arnold, parents of LLUSD class of 2016 graduate Wesley Arnold, DDS, before returning with her husband and son to Zambia.

As miraculous as all of that professional generosity seems to Nsekwa and Jones, it is compounded in their minds by the reception and facilitation of their visas at the American embassy in Lusaka. Ordinarily, they explain, people who request visas to travel to the United States face the suspicion that those requesting visas may not intend to return to their home country, especially when visa requests are for an entire family unit that is requesting a six-month stay.

“When we were applying, people said we were just wasting our money. Because you have to pay for the visa even before you are called for an interview,” Nsekwa continiued. “You first make the online payment and then you go for the interview. We kept hoping for the best. We prayed about it. When we reached the embassy, the lady interviewing us told us she could only give us two visas. We had to decide who goes, between my husband and our son.

“So we excused ourselves to think about it,” Nsekwa recalled. “We waited until everyone else was done or had left. We poured out our hearts to the consular officer about how dangerous the world has become and how you just don’t want to leave your children with anyone. She seemed surprisingly understanding, because what they tell you is that once they have decided not to give you a visa, they don’t change their minds. That’s it. But this time around it worked out differently.”

“By God’s grace,” Jones added with a broad smile, “we were given the three visas just the same day we went for the interview.”

It is all the more gratifying to Nsekwa and Jones that both of their employers made it clear to them that their jobs would be waiting for them when they returned to Zambia, even if they were away for six months. This suggests the competence and conscientiousness both young people must bring to their work.

This episode in the lives of Nsekwa, Jones, and Shemaiah is likely to have an optimistic sequel: Dr. Arnold, now serving as director at the Lusaka Adventist Dental Clinic, most likely will be the one to place new teeth in Nsekwa’s regenerated left mandible when it is ready for implants.

Most of the miracles in this story are a consequence of LLU School of Dentistry Deferred Mission Appointee graduates who have internalized their School’s motto: Service is our calling.