The LLU School of Dentistry connection with Dr. Ingle included the participation of Leif K. Bakland, DDS, Ronald E. Buell professor of endodontics, Department of Endodontics, as co-editor of Ingle’s Endodontics 6 (2008), his longstanding friendship with both Ingles; and the contribution by members of LLU endodontics faculty to many chapters of Dr. Ingle’s magnum opus. 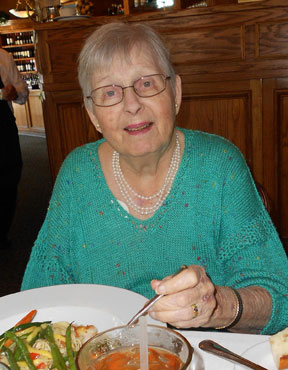 The American Association of Endodontists recognized Joyce Ingle’s contribution to their specialty with the following obituary:

Between 1924 and 1936, Joyce attended elementary and high school in Colville. Following graduation she served as secretary to the administrator of the Washington State Welfare Administration. In 1937 she attended Washington State College. She was pledged to Pi Beta Phi sorority. In 1938 she returned to her previous position in Colville to prepare for her planned forthcoming marriage.

After their wedding, the Ingles moved to Chicago where John was finishing his final two years of dental school at Northwestern University. Joyce supported the new family with numerous secretarial positions. Chicago provided a wide variety of culture and entertainment for the couple, including the initial presentation of Tennessee Williams “The Glass Menagerie,” and the much cited revision of Gershwin’s “Porgy & Bess.”

After graduation, Joyce served four years as a military wife at John’s postings at Army Air Fields in Illinois and Nebraska. In 1945 the couple was blessed with a son, John Geoffrey. The next move was to the University of Michigan for John’s graduate training. Then back to Seattle and the University of Washington faculty, to begin 16 years raising a family; Geoffrey, Leslie Joyce, born in 1947 and Schuyler Neal born in 1950.

Over the next 20 years Joyce perfected the art of multi-tasking—raising three children, Cub Scouts and Brownies, chauffeuring, PTA, teaching dancing, entertaining faculty, students and visiting dignitaries. In addition she joined other faculty women in producing four elementary school reading texts accepted by a number of states. She then learned Braille to translate the books for blind children, a skill she continued throughout her life.

Over the years she joined her husband on lecture tours as they visited all the continents except Antarctica. On two occasions Joyce served as secretary, producing final reports of Israeli and Iranian investigations. All the while she was the principal typist for four editions of Ingle’s textbook, Endodontics, from typewriter, to early word processor, to computer.

In 1964 a major change, moving to Los Angeles and the University of Southern California where faculty involvement was repeated once again.  In 1972, Dr. Ingle retired from USC, moved to Washington, DC, and was appointed to the staff of the Institute of Medicine at the prestigious National Academy of Sciences. Joyce again volunteered as a secretary to the Jimmy Carter Presidential Transition Team, and so impressed them she was offered a full time position in the White House. She turned it down when she learned of the hundreds of hours that would be required. Her family came first.

In 1972, Dr. Ingle retired from the Institute and they moved to Palm Springs where they co-founded Palm Springs Seminars Inc. Joyce served as Secretary/Treasurer. Over the course of 12 years the seminar presented continuing education courses to over 15,000 national and international recipients.

In 1989 Joyce and John retired for good, moving to Casa de las Campanas in San Diego. They both volunteered for various committees and Joyce was a lead librarian for years.

Surrounded by family, Joyce Ledgerwood Ingle died quietly, on March 8, 2014. She would have been 96 years in June. She is survived by her husband, Dr. John I. Ingle, her children Geoffrey, Leslie and Schuyler, by her grand children, Jessie, Travis, Farrell, Michael and John, by her great grandsons, Xander and Lennon, and by her niece, Barbara Johnston from Boston. Her ashes will be buried in Colville near the graves of her parents, grandparents and great grandparents.