Raeleen Whitt’s cancer saga began eight years ago, in January 2007. As a sixteen-year-old, she was diagnosed with acute lymphoblastic leukemia (ALL). She underwent nearly three years of chemotherapy (much of the time under hospitalization) and missed her junior and senior years of high school; nevertheless, she completed her secondary education through the Corona/Norco school district’s home/hospital program. 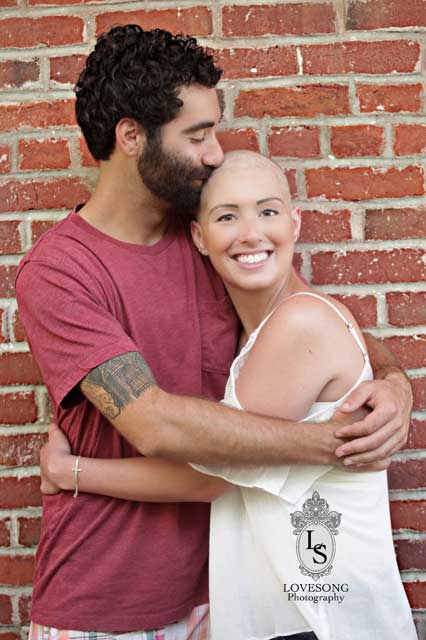 Raeleen with her brother, Derek. Raeleen colored her hair red—like Ariel from the little mermaid—in the spring of 2014, before she lost her hair to chemotherapy.

During her third year of maintenance chemotherapy, Raeleen attended California State University San Marcos as a cancer-free young woman, focusing on pre-nursing requirements. At the end of her second year at CSUSM, Raeleen made the decision to transfer to California Baptist University (CBU) in Riverside. It was only the second day of school, September 2010—the day after her 21st birthday celebration—that Raeleen began to experience flu-like symptoms and called her mom. Thinking that Raeleen might need some hydration, her mother, Colleen Whitt, DH’79, MS, assistant professor, Department of Dental Hygiene, took her to a primary care doctor in Loma Linda. Blood work revealed discouraging results, and Raeleen immediately was transferred to LLU Medical Center. After lengthy tests and a bone marrow biopsy, an oncologist confirmed the return of ALL.

This time the oncology team suggested a bone marrow transplant, or another two years of chemotherapy. Raeleen’s dream of becoming a nurse seemed elusive as, for the second time, she was fighting for her life. The failure to find a bone marrow match left her with another two years of intensive chemotherapy that required hospitalization for supportive care that included countless blood and platelet transfusions. (A July 2014, story, by KABC reporter Denise Dador, focused on Raeleen’s story and reported the urgent need for blood donors.)

Two years passed and Raeleen was once again cancer-free. She returned to CBU in Riverside and completed her pre-requisites for nursing school. She was celebrating an acceptance to the CBU School of Nursing in the Spring of 2014 when she noticed some unusual bruising on her body. Blood tests confirmed a low platelet count and a bone marrow biopsy was performed. After 15 months free of cancer, ALL had returned for the third time. 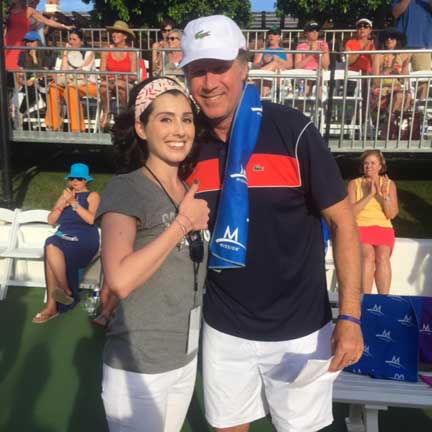 Raeleen with Will Ferrell volunteering at the Desert Smash, Indian Wells, March 2015. Will Ferrell supports "Cancer for College" which provides scholarships for students who are cancer survivors.

An intense search for a marrow donor began, as this was Raeleen’s only option; and chemotherapy was employed to put her body into remission and prepared for a bone marrow transplant. Once again, no 100 percent match was found, despite multiple bone marrow drives and an international search of the bone marrow registry.

Traditional bone marrow transplants have matching “markers” between the donor and the recipient. But “City of Hope” in Duarte, California, has experienced success with “haploid transplants”— transplants that have only half the matching markers. And so after six months of chemotherapy, full body radiation, and countless prayers, Raeleen at age 24, received brother, Derek’s “vegan” bone marrow on September 25, 2014. Derek was 28 years old and very scared, but honored to be his sister’s donor.

Raeleen was hospitalized in isolation until almost Thanksgiving 2014. (Bone marrow transplants temporarily wipe out all immunity.) The Whitt family had a blessed Thanksgiving at home! To date, Raeleen has not experienced any “graft vs. host” disease, which is one of the biggest threats to health after a transplant.

It has been almost seven months since the marrow transplant, and Raeleen is getting stronger daily. Her outlook on life is superb! She eventually will return to nursing school, but not until her immune system has returned to normal (roughly two years post transplant). Then, she can resume the pursuit of her dream to become a nurse—maybe even a pediatric oncology nurse!

At the moment, Raeleen is enjoying life. This summer she will become a nanny to her cousin Kristen’s new baby girl and two-year-old, Brooklyn. Life couldn’t be better!

A night of jazz with Team Fuzzy
This Saturday evening, April 18 at 5:00 p.m., the Whitt family hosts its eighth annual jazz concert/fundraiser for the American Cancer Society featuring the Sozo Jazz Band. The location is in Corona—at the Dos Lagos Shopping Center’s in the outdoor amphitheater (2780 Cabot Drive, Corona). It is a very nice venue. Friends, children, and families are welcome. A donation-only event, contribution checks should be made payable to: “Relay For Life,” c/o Vern & Colleen Whitt 4069 Inverness Drive, Corona, CA 92883. 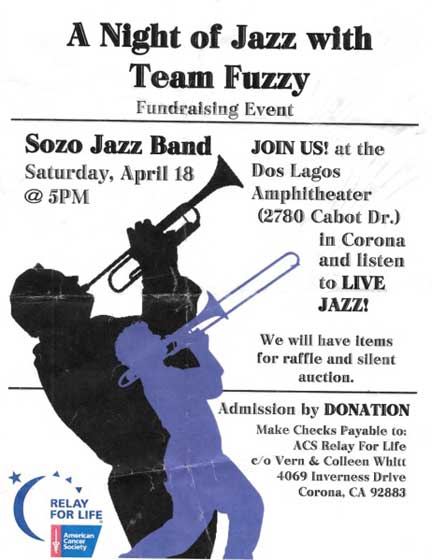