The Southern California Section of the Pierre Fauchard Academy presented Ronald E. Fritz, DDS’72, MPH’72, with an award of Special Appreciation during its May 14, 2016, annual spring luncheon at the Anaheim Hilton. 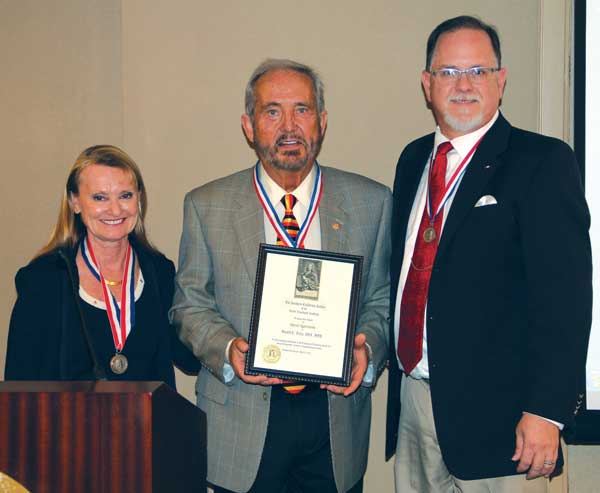 A fellow of the Pierre Fauchard Academy, Dr. Fritz’ Special Appreciation award was in recognition of his “exemplary dedication to the profession of dentistry and for his many distinguished services to humanitarian missions.”

In 1978, Dr. Fritz opened a private practice in Escondido, California, that utilized calming verbal imagery as well as IV Sedation to relax patients with dental phobias, simultaneously serving on the staff of Palomar Memorial Hospital where he took cases that required treatment under general anesthesia.

Dr. Fritz’ cynosure is the delivery of oral health care to the most needy people, and, given his fluency in Spanish, especially those in Latin America. His most recent mission trip was two weeks to Huatulco, Oaxaca, Mexico, in January of 2016, where the group from Imperial Valley provided much needed care and education to outlying poor areas in rural Huatulco and Puerto Escondido. He has been on similar service trips to Bolivia, Peru, Ecuador, Galapagos Islands, Colombia, Guyana, and Brazil as well as to Mexico, India, China, Micronesia, and multiple islands in the Caribbean.

Dr. Fritz is a member of the American Dental Association, California Dental Association, Colegio de Cirujanos Dentistas de Puerto Rico, and the San Diego County Dental Society, where he has chaired its Well Being Committee. He also helps the Flying Samaritans and Los Medicos Voladores (Flying Doctors) with their missions of mercy to the underserved in California and Mexico.

An international honor dental organization, the Pierre Fauchard Academy is dedicated to the advancement of the dental profession.  Fellowship in the Academy is by invitation only and its current membership is comprised of those individuals who have made outstanding and meritorious contributions to the science and art of dentistry or to society.

Named after Dr. Pierre Fauchard (1678-1761), the father of modern dentistry and author of the ground breaking, 783-page, two-volume Le Chirurgien Dentiste (1728), the Academy was organized in 1936 and dedicated to the advancement of the dental profession.

The Academy accomplishes its goals through literature, by encouragement of advanced and continuing education, and by honoring those who have made outstanding contributions to the profession.  The Academy has over 7,000 members in 68 nations.