Skip to main content
By School of Dentistry - September 5, 2013

Reprinted with permission from the May 2013 Journal Plus Magazine of the Central Coast.

“… the only ones among you who will be really happy are those who will have sought and found how to serve.” –-Albert Schweitzer

It has been said that achievements are what we do for ourselves while what we do for others provides life’s meaning. History is replete with tales of the former while sustainability of the human spirit results from the latter. In the saga of humanity, both deserve equal acknowledgement. Indeed, virtues may have their own rewards, but it is refreshing to note them in the public square.

Known locally as Dr. Peter C. Nelson, dentist, the efficient preservation of dental hygiene is but one aspect of a life dedicated to much more than floss or fillings. Taken as a whole (and far from over), the mosaic of his life presents an intriguing picture of a person much more interesting than the sum of his accomplishments. “Hard work, be frugal, take risks” has guided his life. 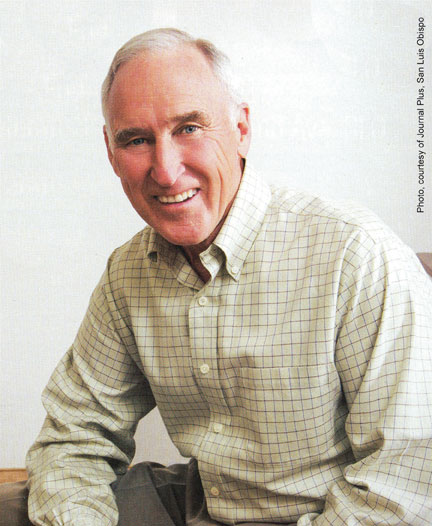 Born in Baltimore, Maryland, while his Navy father was an intern at John Hopkins Hospital, reassignment a few months later found the family in southern California. Early years near his grandfather introduced him to carpentry and his lifelong delight and talent with working with his hands, including building his own hone. With a local church group, he began years of progressively more difficult climbs culminating in challenging many of the world’s most notable peaks. An extended family professionally involved in the health care field promised a future as a doctor. Thus, to the consternation of some, he chose dentistry.

Dentistry, he explains, combines his satisfaction with working with his hands (truly a hands-on profession) and the more immediate solutions that often elude doctors. Lastly, dentistry allows him to interact with people—literally face to face. 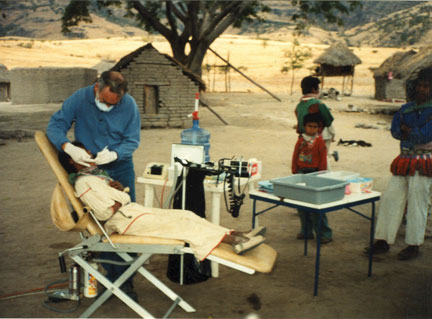 After graduation from the Loma Linda University School of Dentistry in 1970, he looked north to establish a practice. Fortunately, he settled in San Luis Obispo. As happens to many, a profession and home life (he is married with two adult children) required most of his attention. In addition to a busy practice, he dedicated about 25 years to weekly trips to Juvenile Hall, examining teeth, and providing the young people with treatment. All was done at an “extremely reduced” rate. For many, career/family years pass with their triumphs and failures, but for Nelson both his profession and loved ones share in yet another life—adventures pursued with astonishing vigor.

Service is not confined to his office but reaches throughout much of the world. Inspired by his missionary doctor father-in-law, he has traveled to about 25 outposts in the world. Free dental help has included service in Africa, Vietnam, Mexico, Central and South America, various Pacific islands, and the Philippines.

Sometimes going from place-to-place with a local practitioner or covering a practice for a vacationing dentist, he also has established clinics to provide continuing care. Las October, he traveled to Kenya as a volunteer for the World Dental Health Organization. Other sponsoring agencies include Loma Linda University, Catholic Relief Services, Rotary, and Amistad International. 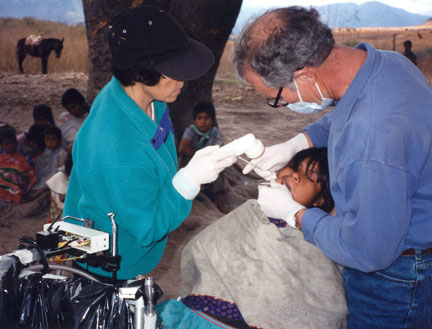 Dr. Nelson and his wife, Suzanne, performing dental work in a primitive setting.

Not only are his services voluntarily given, but he also finances his costs. Sometimes accompanied by dental students or local professionals, his wife, Suzanne, has contributed her skills as a dental hygienist. Even his son and daughter have been “assistants.” While language differences can be a barrier, to him “a cavity is a cavity in any language.”

His reasons for service are multiple but he simply says he’s trying to better understand life’s realities more than is possible locally. In the process of service, he has also transformed the reality for many desperate for dental care.

Somehow, in between a family, practice and volunteering, Nelson continued to climb a variety of peaks throughout the world. Mt. Rainier (Washington), Mt. Hood (Oregon), Peak Lenin (Russia), and Mexican mountains to name but a few challenges were preludes to the “premier” climb in the world.

An unusual celebration occurred atop the 20,320-foot summit of Mt. McKinley (Denali), the highest peak in America. Carefully planned to arrive on the summit on his 40th birthday in June 1985, severe weather delayed the “celebration” by two days. In a full-page article in the Tribune (June 27, 1985), Nelson is quoted as hoping to scale more peaks. Unexpectedly, one was Mt. Everest. 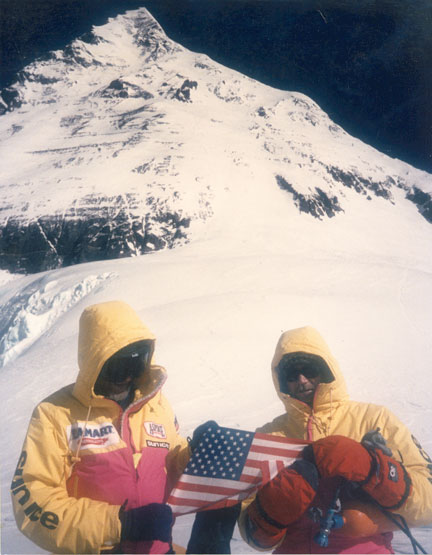 Extremely hazardous, for every 120 hikers, McKinley claims one life. For Everest in 1990, it was 3.2 to one. Nelson was asked by a team of American climbers to join them to brave the nearly 30,000-foot mountain situated on the borders of Nepal and Tibet. To the highly experienced climbers, Nelson’s previous climbs spoke well for his ability to survive the assault of the mountain. With temperatures known to drop to minus 35 and winds up to 1`00 mph, even the most seasoned climbers have died in attempting to reach the summit. “We were required to sign a ‘no-recovery’ agreement before we started,” he explains. If you die climbing, you can be left. It is estimated that Mt. Everest is the tomb for about 200 climbers. Five died during his week there.

Speaking with his family about the challenge, they agreed he needed to go or he would spend the rest of his life wondering about the hike. They had learned his life’s “balance” required periodic adjustments.

Huddling in ice caves, eating chocolate bars reminiscent of war rations, he was suffering from pulmonary edema—with a 25 to 50 percent chance of surviving. Prudence trumped bravado and he returned to a quick recovery at the base camp. Not one to waste time, while waiting for his plane, he spent three days helping in the dental clinic in Katmandu. He returned later to Nepal to offer additional dental assistance. 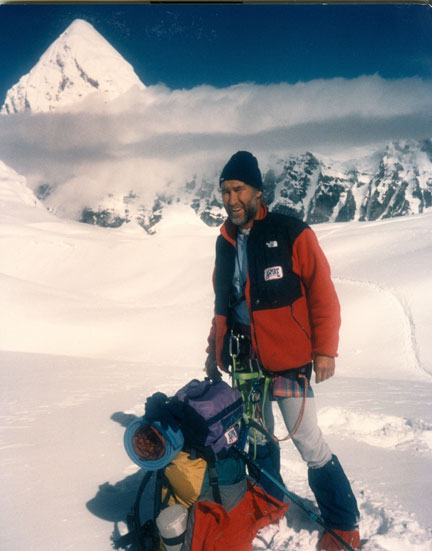 Typical for his outlook on life, when asked if he was disappointed not reaching the summit, he emphasized that victory was in the attempt. “What’s really important is that you climb all the mountains in your life with courage and joy.”

It is no wonder in 1992 his alma mater named him Alumnus of the Year. One of three criteria asks that one’s life “exemplifies the basic principles of Christianity.” Even his middle name, Christian, recommended him for the honor. Later, for six years, he traveled south to Loma Linda as an Associate Professor of Restorative Dentistry.

In his “spare” time, both he and Suzanne enjoy marathon events. A favorite memory is an event through Berlin a year after the wall was removed that divided the German city. Never reluctant to meet a challenge, they have ridden their motorcycles to the tip of South America via Chili and Argentina and north through Alaska. Combining charity with stamina, a favorite event for both is tandem bike riding in the Century Bike Ride in support of the Best Buddies program for the Special Olympics—a hundred mile route from Carmel to San Simeon. Not all rides are pleasant. A serious accident on the tandem left both with broken bones. A year later, he had severe hip injuries in a skiing accident. Still, he commutes from Squire Canyon (Avila) to his office on a bike. 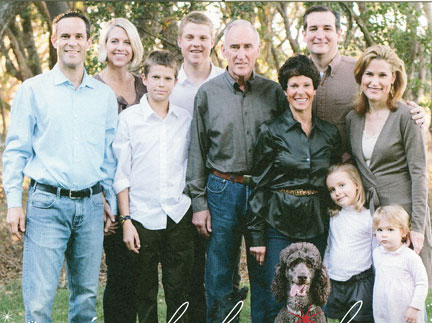 Dr. Nelson with his wife, Suzanne, their son, Scott (far left), their daughter, Heidi (far right), their children’s spouses, and their grand children.

Talent is contagious in the Nelson household. His son, Scott, is currently a member of the orthopedics department at Loma Linda [University] Medical School. When the 7.0 earthquake struck Haiti in early 2010, he was in the Dominican Republic establishing an orthopedic program for children. Quickly, he became one of the first to render medical aid to those crushed and broken in the devastated capital. In a touching tribute to the suffering Haitians and selfless volunteers, Together We Move, was written to raise funds. The chapter on Scott is telling by its title: “Some Say He Operated for 90 Straight Hours: Personally I Can Verify Three Straight Days.”

When Nelson arrived in April, he came with a tool kit and helped rebuild the damaged Adventist Hospital. Desperately needed electricity in the operating room required he work with a live current.

Daughter, Heidi, a Phi Beta Kappa undergraduate, earned her MBA at Harvard Business School. She is now a successful investment executive and White House advisor. The mother of two, she is married to the newly-elected senator from Texas, Ted Cruz.

Currently chairing a fundraising effort to substantially remodel Valley View Adventist Academy, Dr. Nelson is sure to point out that what he does provides more than adventure but meaning for his life, and while not mentioned, to many others.

A revealing self-test is placing a mental “A” next to one’s achievements and an “S” next to those in service to others. The growing list for both “A” and “S” would indeed be long for a remarkable dentist named Peter C. Nelson.