Nicholas Caplanis, DMD, MS’96, of Mission Viejo, California, was installed as president of the 4,500-member American Academy of Implant Dentistry (AAID) October, 2012, during the Academy’s 61st Annual Meeting in Washington, D.C. He has been a member of the Academy’s board of trustees since 2004 and a member of its executive committee since 2008. 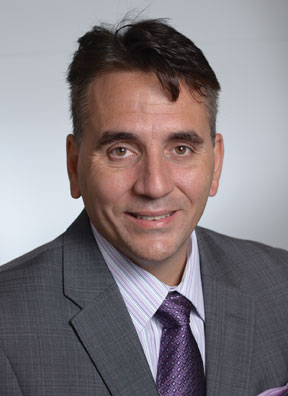 Dr. Caplanis’ road to AAID leadership runs through Loma Linda University’s School of Dentistry, the first dental school to develop, under the direction of Robert A. James, DDS, MS’72, in 1976, an advanced specialty education program in implant dentistry.

Beyond the private practice limited to periodontics and dental implant surgery he has maintained in Mission Viejo, California, since 1997, Dr. Caplanis is an assistant professor and part-time faculty with the Advanced Specialty Education Program in Implant Dentistry at Loma Linda. He completed the School’s three-year residency in implant surgery and prosthodontics in 1995, earned a Master of Science degree in oral implantology in 1996, and a specialty certificate in periodontics in 1997.

Dr. Caplanis says he “fell into implant dentistry entirely by accident.” While still fourth-year dental students at the University of Medicine and Dentistry of New Jersey in 1991, Dr. Caplanis and a classmate attended the MaxiCourse® directed by Norman Cranin, DDS, DEng, at the Brookdale University Hospital and Medical Center in New York, who “was gracious enough to discount the tuition for us.”

“When I finished the MaxiCourse,® I decided that I wanted to devote my entire professional career to implant dentistry and sought out post-graduate programs in the field,” says Dr. Caplanis.At the time there were only two such programs besides the one at Loma Linda: the program at Brookdale, and another directed by Carl Misch, DDS, MSD, PhD, then at the University of Pittsburgh School of Dental Medicine.

During a one-year hospital based general practice residency following dental school at Englewood Hospital in New Jersey, Dr. Caplanis’ fiancé (now his wife of 20 years) insisted that if they were going to move away from their families to pursue postgraduate training, they weren’t going to live in the cold climate of the Bronx or Pittsburgh. In a fall 2012 interview with AAID News, Dr. Caplanis described his path into implant dentistry:

That same year [1991] I attended my first AAID meeting and the decision where to go was firmly made after meeting Dr. James. I approached him as he was coming off the podium to ask him about his training program. He was in a rush to catch a flight home, but was gracious enough to invite me to his hotel room where we chatted while he packed his suitcase. He was a warm and compassionate human being and seemed to know everything about implant dentistry. I was very fortunate to be accepted to Loma Linda’s program and train under Dr. James the very next year in 1992.

As a Loma Linda implant resident, the AAID was an integral part of our education. We became involved with the national as well as the district meetings, doing poster as well as oral research presentations. The three-year program was intense, and many of our faculty members were AAID members. We were usually in the clinic all day and in the lab until late at night, with graduate courses in between. We became proficient in all the common implant types used today, but also subperiosteals, ramus frames, and blades. We designed our own subs, and even cast a few custom blades along the way.

During my second year [at Loma Linda], Dr. James passed away, but the program was in good hands with Dr. Jaime Lozada who took over as director. Dr. Lozada and I developed a close friendship that persists to this day. I give credit to Dr. Lozada for getting me politically involved with the Academy.

When I finished the implant residency, I realized that, in the eyes of the ADA, I was still a general dentist. I didn’t think it would be possible to establish an exclusive dental implant practice. I also realized that, placing implants at that time as a general dentist would make me a target for every malicious surgeon or periodontist in the community. So as the saying goes, if you can’t beat them, join them; I decided to further my education and applied for a residency in Oral Maxillofacial Surgery. While I was waiting to find out if I was accepted to a surgery program, my master’s thesis director, Dr. Ulf Wikesjö [DDS, DMD, PhD], who was the program director of Periodontics at Loma Linda [1990-1996], asked if I would join his faculty to teach implant surgery to the periodontal residents. The only problem was he didn’t have enough money in his budget to pay me. So instead, he offered to let me go through the periodontal residency without paying tuition. I thought it was a great deal and took him up on his offer. That’s how I became a periodontist. I no longer provide definitive prostheses for my patients, but I still consider myself an implantologist and do provide restorative care to friends and family.

Dr. Caplanis is senior associate editor of the Journal of Oral Implantology, author of more than a dozen clinical technique and research papers, and is co-author of a few textbook chapters with a focus on periodontal and peri-implant bone regeneration and soft tissue esthetics around single tooth implants. He lectures nationally as well as internationally on the inter-related topics of, Periodontal Reconstructive Surgery and Implant Dentistry.