Drs. Rami, DDS, IDP’06, and Balsam, DDS, Jekki, both LLUSD faculty, could be called pioneers. They were the first in their respective families to leave Baghdad, Iraq, and—three years later—to achieve their objective: arriving in the United States. Subsequently they have welcomed their parents and all of their siblings to the land they chose to adopt as their own. That adoption has required considerable effort. 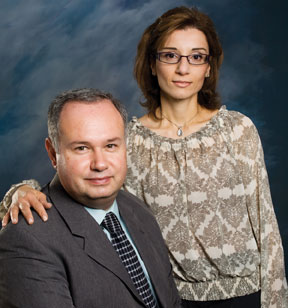 Born and raised in Baghdad, the Jekkis met at the University of Baghdad’s School of Dentistry. After dental school graduation, the couple married and established a practice in Baghdad. As part of their game plan of immigrating to the United States developed, they drove three years later with their infant daughter to the Iraq-Jordan border. Two firmly packed suitcases for each (a careful choice of clothing, family photos, and books) took on the appearance of a family on short holiday jaunt. They would spend three years in Jordan, where, lacking licensure to practice, they used their expertise in a dental office, serving essentially as dental assistants while awaiting word on the success of their vast paper work submitted to gain entrance to the United States. After a three-year sojourn in Jordan, the Jekki family arrived in the United States during the final days of 2000.

“It’s been a journey,” Dr. Rami says. “You don’t know anybody. You start a life from the beginning.” Again working as dental assistants, this time in San Diego, the Jekkis admit they were missing members of their close knit families. They coped by exploring their environment—the shops and the plethora of new technology available in their new setting. Coming as strangers, they were asking, “What do you say to people you meet and know nothing about them?” They found their new home living up to its reputation. “You see freedom,” they note. “People have their rights.”
Back in school for the courses that would prepare him to practice dentistry in the United States, Dr. Rami completed Loma Linda University’s International Dentistry Program.Both of the Jekkis accepted faculty positions. Concurrently Dr. Rami Jekki is pursuing the Advanced Specialty Education Program in Prosthodontics course, which he expects to complete in June 2012; Dr. Balsam Jekki is teaching in the IDP program. Their daughter, now 16, is an honor student at Redlands High School. Yes, she knows both Arabic and English, languages getting rather equal usage at home.
Their faculty appointments were unexpected by the Jekkis. But, as Dr. Rami comments on his choice to forego a more profitable private practice, “money isn’t everything in life.” Dr Balsam finds considerable satisfaction in welcoming, nurturing, and teaching students who are experiencing the challenges of a different culture. In fact, her husband confides, “she sheds tears every time a ‘batch’ of students graduates.”
“I never thought I would be a faculty member in my life,” she says, then adds, “I cannot live without the students anymore.”  Additionally, she has achieved skill with axiUm, the School’s dental institution management software. She recently joined Paul Richardson, SD ’72, MEd, associate dean, Clinic Administration, in giving lectures at a dental convention in Canada on the use of axiUm. “If you’re organized,” she says, “axiUm makes a lot of sense—it takes care of so much detail.”
August 25, 2011, marked another milestone in the Jekkis’ journey. In Los Angeles with 4,000 other immigrants, they attended a ceremony that admitted them to citizenship. “We wanted to come here for a better life,” says Dr. Rami Jekki. “We like the Christian environment.”
“This is my home,” the American Dr. Balsam Jekki affirmed.  Being the first in their families to become citizens, the Jekkis are promoting their family members who are now in a similar process.