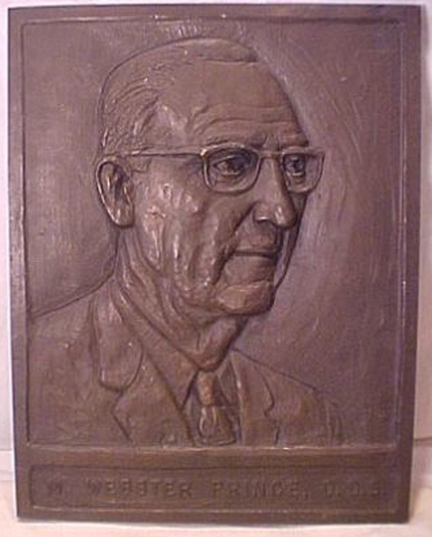 Several weeks ago Brent Coffman, a nurse anesthetist who works in Boca Rotan, Florida, was perusing early Loma Linda memorabilia that was being offered on ebay when he noticed an auction for a bronze relief plaque of Webster Prince. He thought he recognized the plaque as one he used to see frequently in the late 1980s as he walked past the School of Dentistry on his way home from school at Loma Linda Academy.

Brent called his dad, William Coffman, SD’83, who practices privately in Yucaipa, California. As an LLUSD alumnus, past president (2001) of the American Academy of the History of Dentistry, member, since 1991, of the nine-member Loma Linda Historical Commission, past president (2002) of the Tri-Counties Dental Association, and a member of the Pierre Fauchard Academy since 2002, Dr. Coffman was very interested in this particular bronze.

He considered purchasing the piece, but then thought why not let the School handle it directly. When he called the School’s dean, Charles Goodacre, SD’71, MSD, at home to suggest it, Brian Goodacre, the dean’s class of 2013 dental student son, answered the phone. Recognizing its potential significance for the School, Brian surfed his way to the ebay seller and made the purchase for $55, plus $12.27 for shipping from Los Angeles to Loma Linda.

The Los Angeles headquartered A. J. Bayer Company that created the Prince plaque, a manufacturer of hand chased bronze since 1902, went out of business some years ago. Ironically, while the Webster Prince item sold for $55, a twelve-page trade catalog of the A. J. Bayer company’s portfolio from 1956, illustrated with many black and white reproductions of “memorial tablets, permanent bronze honor rolls, portrait memorials, historical markers, ecclesiastical tablets, public project tablets, commercial signs, [and] school identification plaques,” is offered (as of October 2011) by two online booksellers for $275.

Many curious School of Dentistry related minds have wondered when and how this object of a durable but waning art form, with such an obvious historical connection to the School, got away from Prince Hall and wound up being auctioned at such a trivial venue. None of several senior members of the School faculty that have been queried by this reporter can recall when the plaque was commissioned and presented, or where in the School it was once displayed.

If any of our readers has knowledge that would solve this mystery, please email this office at: dhackleman@llu.edu