Connecting North and South America are seven countries that sprawl southeastward from the southern border of Mexico, each unique in its own way. In the middle of this chain of countries, known as Central America, lies roughly triangular shaped Nicaragua—destination (June 2010) for a group of 59 LLU School of Dentistry students, dentists, nurses, and auxiliary personnel. 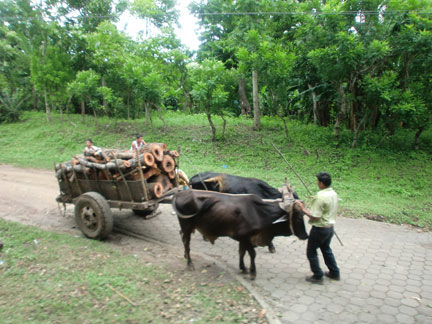 A common scene in Nicaragua, even in the capital city of Managua. This is the way goods are hauled to market or home.

With a population of less than six million, Nicaragua, which translates “land of volcanoes and lakes,” is the largest and least populated Central American country. It is also the second poorest country in the western hemisphere (after Haiti in the Caribbean) and the poorest on the continent, with 70 percent of its people surviving on less than two American dollars per day. 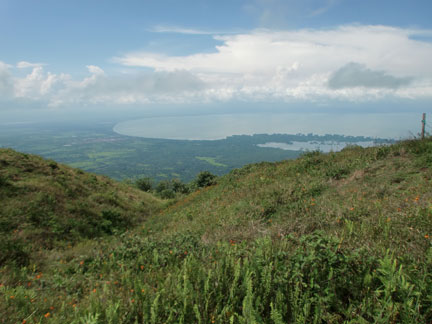 Looking down from Mombacho Volcano to huge Lake Nicaragua, and the city of Granada on its shores.

Nicaragua declared independence from Spain in1821; and despite its tumultuous history of dictatorships, revolution, civil war, natural disasters, and economic collapse, Nicaraguans are happy and optimistic people, friendly and warm. The secondary language of the indigenous people is Miskito, money is the Córdoba (US dollar also is widely used), 1,400 animal species abound, there are over two million cell phones, 12 percent of roads are paved, and the voting age is 16. Nicaragua’s national dish is “Gallo Pinto” (speckled rooster). In a region so obsessed by rice and beans, it is hard to believe that anyone claims to have invented the process of mixing the two, the result of which is known in Nicaragua (and in Costa Rica) as Gallo Pinto. This national dish is comfortably eaten at morning, noon, and night. The national drink is “Macua,” a blend of white rum and guava juice. And the “Chichi,” or “Chichi Bruja,” is a bright pink, fermented corn beverage. 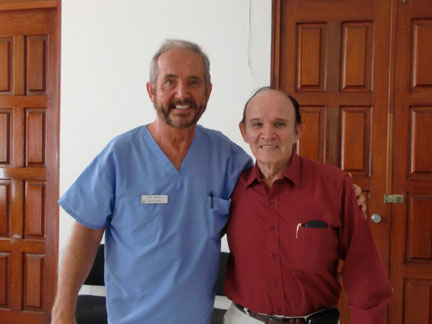 Nicaragua’s civil unrest has had a reputation for some time, but a ceasefire went into effect 20 years ago. Even though the country has its share of challenges, with jobs scarce, the economy poor, and its politics challenging, it is today a safe and peaceful country. Members of the dental team strolling a lovely plaza or gazing down toward Granada and Lake Nicaragua (Lago Cocibolca) from high up on Mombacho Volcano felt they were living a dream. 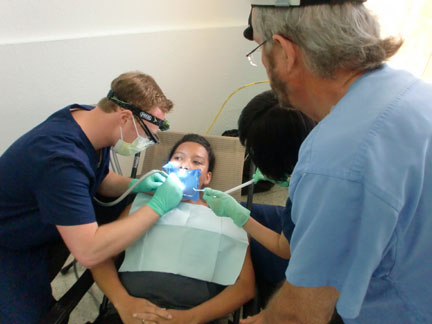 Brian Goodacre, LLUSD class of 2013, performs a meticulous procedure with rubber dam, emphasizing the quality of care given to the needy patients, while Dr. Fritz checks his steps.

At one point in the 1850s, the strong desires of conservatives in Granada and liberal party members to the north in Leon, each for their city to be the capital of Nicaragua, resulted in civil war. To resolve this, a compromise was reached that concluded the contentious internal rivalry: Managua, the small, proud indigenous fishing village on the shores of Lago Xolotlán (Lake Managua) between the two was finally named capital of Nicaragua. This city of 1.5 million probably can best be described as disorganized and disjointed—a scattered, disheveled urban sprawl with no center, looking like a bomb hit it. That bomb was a 7.5 magnitude earthquake in 1972, five miles below the center of the city. Rebuilding on the shifting tectonic nightmare was considered pointless, which left today’s capital a ghost town, surrounded by dispersed, anonymous neighborhoods, pockmarked with craters and crisscrossed with streets that lack character as much as they lack names. Addresses are not given as a street and number, but rather as a few descriptive lines of where they are in relation to a landmark, business, or other reference point. 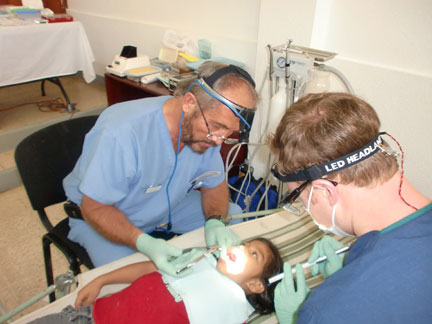 Some of the patients presented with either a difficult procedure or were uncooperative. Brian Goodacre, class of 2013, assists Dr. Fritz with a surgical procedure on a frightened little girl.

The Loma Linda dental group entered this environment as a mission project to improve the oral health in five separate Nicaraguan areas. The sponsors were Loma Linda University and the Foundation for Worldwide Health (FWH), of which Mark Carpenter, SD’80; Tom Rogers, SD’83, MPH’96; and Henry Mercado, SD’77, are directors. When Dr. Carpenter visited Nicaragua in 1999 to do some electrical repair and maintenance, he noticed the high incidence of oral disease in the children. The result was the formation of FWH and now its 11th June dental mission trip to Nicaragua. One offshoot is “Nathan’s Project,” to provide handicapped children who need dental treatment under general anesthesia. Dr. Mercado’s son, Nathan, born with Down’s Syndrome, unfortunately died several years ago at the age of 23. Nathan’s name and spirit live on to provide important help for other Down’s syndrome children. 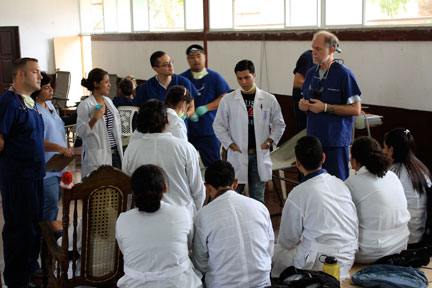 Dr. Carpenter addresses the Nicaraguan students from the dental school in Leon, to orient them on how the clinic will operate.

One of the five mission groups stayed and worked a couple of hours drive west of Managua in Leon. Other groups went to San Marcos, Acahualinca, Catholic University School of Dentistry (UNICA), and Hospital Metropolitano in Vivian Pellas. Providing dentistry with portable units and modified adjustable aluminum lounge chairs was intense and backbreaking. At UNICA, the dean, Lorenzo Muñoz, MD, DDS, PhD, originally from Cuba, arranged a mirrored clinic so that his third year-students (of a five-year curriculum) could work side by side with LLUSD students, often mixing in and working on “the other side of the aisle.” Students’ confidence strengthened as relatively sophisticated dentistry was lovingly provided for these beautiful children. 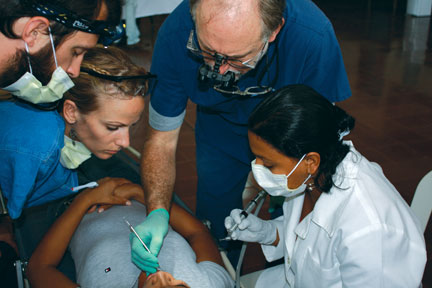 Dr. Carpenter works with a Nicaraguan student, being assisted by class of 2011 dental students Rebecca Flais and Justin Schmidt.

Why would people travel to Central America, incur expenses, provide free care, struggle with foreign language, food, and culture? Where there is the potential to help others, the golden rule prevails. Service to others in need is not only an obligation, but an opportunity, and a distinct privilege as well. 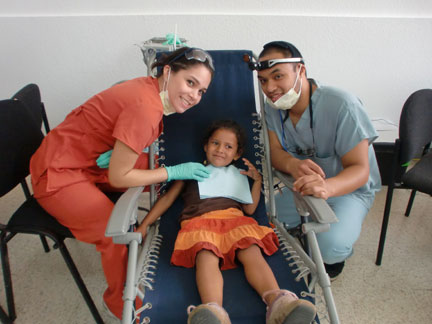 One of Dr. Mercado’s young patients from a previous visit handed him a note in a home-made envelope. He opened it to read: Doctor, Gracias por su atención en mis dientes, gracias a usted y a mi dios, mi Padre Eterno. No me duelen mis dientes. Yo lo quiero mucho a todas las personas que tengo como amigo ahí y a usted. (Thank you, Doctor, for your attention to my teeth. Thanks be to you and to my God, my Eternal Father. My teeth don’t hurt anymore. I love all the new friends I made there, including you.) 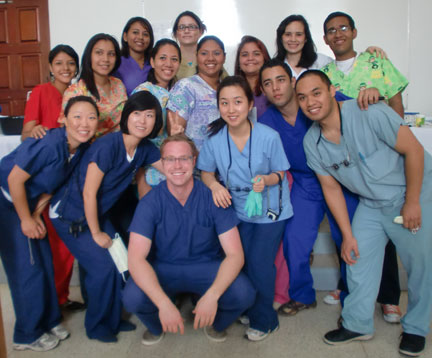 LLUSD students worked along side Nicaraguan students, all with the same goal of improving their patients’ oral health. Bonds of international friendship were formed that will last for the duration.

The magic happens when, in our attempts to give to needy Nicaraguans, we end up looking back and realizing we have actually received more than we have given. A spiritual blessing is the deep sense of unselfish gratitude at being trusted to relieve the suffering and pain of others.