One of nature’s marvels is the metamorphosis that takes place when a tiny butterfly egg on a leaf becomes a creeping larval caterpillar and then a dynamic chrysalis cocoon from which emerges a beautiful adult butterfly with the capacity to soar. The story of the initial formation of the School of Dentistry’s Graduate Program in Orthodontics to its current state has involved a progressive metamorphosis orchestrated by many dedicated didactic and clinical orthodontic educators. The goal of these educators throughout the years has been to provide the best possible orthodontic education so that its graduates can soar in their ability to provide quality orthodontic care.

Early History 1955-1969
The School of Dentistry’s founding dean, Dr. M. Webster Prince, recruited excellent dentists to pursue dental specialties at prominent dental schools and then return as faculty in the various departments of the soon-to-be School of Dentistry of the College of Medical Evangelists (CME). Drs. Franklin Nelson and Elizabeth Larsen were slated to head up the proposed Orthodontic Department, which was to be ready by 1955 to correspond with the junior year of the first dental class. Dr. Nelson attended the graduate program in orthodontics at the University of Southern California and subsequently became the first chairman of CME’s Department of Orthodontics. Simultaneously, Dr. Larsen attended the graduate program in orthodontics at Northwestern University and then became a full-time faculty member of the newly formed CME Department of Orthodontics.

CME’s School of Dentistry ‘opened its doors’ to dental students in 1953, although the original structure of the current Prince Hall was not completed until 1955. Thus the School’s first dental class experienced didactic classes and some clinical exposure through ‘doors’ in preexisting buildings on campus during their initial two years of training. Before the completion of Prince Hall, the School of Dentistry’s dental clinic was in Cutler Hall basement, which at that time was principally used for didactic and laboratory teaching in microbiology. Dr. Elizabeth Larsen, the principal didactic and clinical orthodontic educator for pre-doctoral dental students, oversaw the orthodontic clinical training in Cutler Hall for the School’s first dental class. 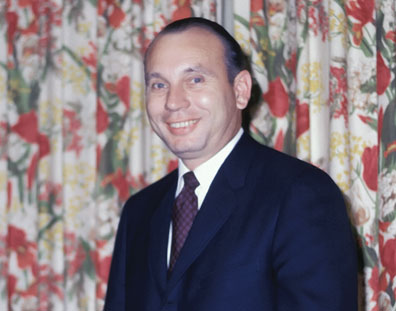 In 1957 Dr. Elizabeth Larsen opened an orthodontic practice in St. Helena, California, as her husband, a biochemist, had been granted a teaching position at nearby Pacific Union College. Dr. Larsen’s brother, Thomas J. Zwemer, at the time an associate professor at Marquette University with eight years of faculty experience, accepted the School’s invitation to become co-chair of the Department of Orthodontics, joining Dr. Nelson, who was serving in a part-time position. Dr. Zwemer was also given the task of developing a graduate program in orthodontics, which would become the first dental specialty program offered by the School of Dentistry. The initial Graduate Program in Orthodontics developed under his direction included a thesis-based master’s degree to be granted by the School of Graduate Studies of CME, later called Loma Linda University. Dr. Zwemer designed a program to have both clinical excellence and didactic academic credibility. While at Marquette, Dr. Zwemer had been working on electromyography as a line of research. His background in innovative orthodontic research and academics at a prominent school made him the ideal person to develop CME’s Graduate Program in Orthodontics. The School of Dentistry and the School of Graduate Studies approved Dr. Zwemer’s well-planned curriculum, and he became not only its architect but also the first director of the Graduate Program in Orthodontics.

Graduate Program Begins 1960
The first class of the Graduate Program in Orthodontics began in 1960 at a time when the U.S. newspaper headlines ranged from hula-hoops and I Love Lucy to the U-2 spy plane and John F. Kennedy’s ascent to the presidency. The first orthodontic residents, Milford J. Anholm and Howard W. Conley, had been long-time friends. Graduating in 1962, just 21 months after they had begun their residency at CME, their master’s degrees were granted by Loma Linda University, as the CME name was changed to LLU in 1961.

Unexpectedly, during their first year of training, Dr. Nelson died and Dr. Zwemer’s title subsequently changed from co-chair of the Department of Orthodontics to chairman while he continued as director of the Graduate Program in Orthodontics.

The following is a thumbnail sketch listing some of the activities of the orthodontic residents during the early years of LLUSD’s Graduate Program in Orthodontics:

Intervening History 1969-1989
The intervening years in the history of the Department of Orthodontics are punctuated by the presence and departmental activities of Roland D. Walters.

A member of CME’s first dental class of 1957, Dr. Walters had also completed LLU’s Graduate Program in Orthodontics in 1967. During Dr. Walters’ era a number of significant departmental policies changed in both didactic and clinical orthodontics. 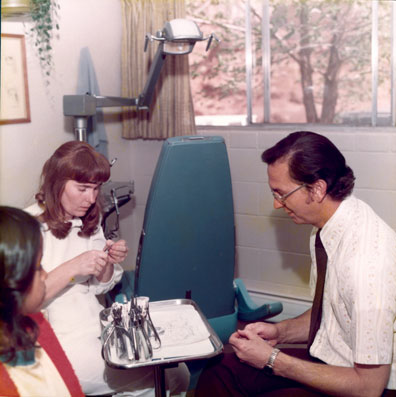 Jim Wise, SD’67, MS’71, associate professor, Orthodontics and Dentofacial Orthopedics, has served on the faculty since 1967.

In 1972 the American Dental Association encouraged graduate programs to standardize the length of their graduate dental specialty training to 24 months. LLU complied and lengthened its orthodontic program to 24 months; however, with the class of 1998 it was lengthened again to 27 months.

In another innovation Dr. Walters introduced the use of computers in the didactic and clinical teaching of graduate orthodontics. A graduate student, Gunther Blaseio, SD’86, inspired this action. For his master’s degree thesis, Dr. Blaseio developed a computer program, now called Quick Ceph, to aid the orthodontist in tracing a lateral cephalograph digitally rather than by hand. Under the leadership of Dr. Walters other innovations have led not only to the continuing metamorphosis of the Graduate Program in Orthodontics but to a noteworthy pre-doctoral orthodontic program. Wanting his orthodontic graduates to be consummate professionals, Dr. Walters developed a graduate program that was strong didactically and clinically as well as promoting relevant and quality research activities by the residents.

Recent and Continuing History 1989-Present
For approximately seven years after the retirement of Dr. Walters, the Department of Orthodontics was the beneficiary of a series of short-term chairpersons.   Also, under the able leadership of Dr. Toufic Jeiroudi as the Graduate Program director and with a very focused and cohesive orthodontic didactic and clinical faculty, the orthodontic program continued to flourish during those years.

The Department of Orthodontics has been blessed by a very long line of excellent residents who are eager to learn and to share their talents with their classmates and under classmates, creating a growing and nurturing climate.

Also, the Department has been blessed with a very caring and supporting clinical and academic faculty and staff who have the resident’s best interests at heart.

Through the generosity of alumni, faculty, staff and friends of the School of Dentistry more than half the amount needed has been raised to officially name specific facilities in the Loma Linda University Center for Dentistry and Orthodontics. But financial support is needed to finish funding the J. Milford Anholm Graduate Orthodontic Clinic. You may have a part in educating future orthodontic professionals while honoring a great educator by making a special gift for this project. You may send your gift to the Office of Development, Loma Linda university School of Dentistry, 11092 Anderson Street, Loma Linda, California 92350. We also welcome your calls to (909) 558-4754 for more information or to make a pledge or credit card gift.

Just as the life cycle of an adult butterfly entails laying its tiny eggs on a leaf with the progression from a creeping larval caterpillar to a dynamic chrysalis cocoon to the emerging beautiful butterfly—just so, the Department of Orthodontics at Loma Linda University has gone through a series of transformations. In the analogy, the emerging butterfly not only represents the transforming department, but it also represents its transformed product, the graduate. The department is the dynamic chrysalis that is designed to produce the best possible graduate, one that can soar in his or her ability to provide the best possible orthodontic care. Just as exciting as it is to see a beautiful butterfly emerge from the rigors of its cocoon and unfold its wings to fly, it is also very exciting to watch our residents develop over time into competent orthodontists enabled to soar into the wonderful world of orthodontics.

The author would like to acknowledge the following individuals for sharing their insights into the history of LLUSD’s Graduate Program in Orthodontics: Dr. Milford Anholm, Dr. Willis Schlenker, Dr. Richard Simms, and Dr. Thomas Zwemer.