Skip to main content
By School of Dentistry - September 16, 2011

The first comprehensive study of the most-cited articles published in journals dedicated to endodontics appeared in the September 2011 Journal of Endodontics—a significant index for determining what articles in endodontic journals have exerted the most impact on the field.

The author most cited was Mahmoud Torabinejad, DDS, MS, PhD, professor and director, Advanced Specialty Education Program in Endodontics, lead author of 12 articles and co-author of four others of the 100 top-cited articles. As a consequence of Dr. Torabinejad’s position on the Loma Linda University School of Dentistry faculty, of the 17 leading institutions that were responsible for the 100 top-cited articles, LLUSD placed first, with 12 articles, followed by the University of Umeå, Sweden with nine and the University of Zurich, Switzerland and the University of North Carolina with five each. 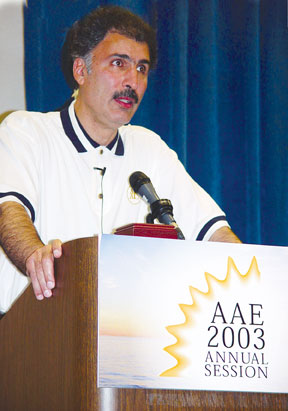 Dr. Torabinejad addresses the American Association of Endodontists as its president.

Far from his birthplace, Dr. Torabinejad, seems comfortably at home in his fourth floor office of Prince Hall. On the wall hangs an attractive plaque with more than 100 tributes of God inscribed upon it. Dr. Torabinejad easily translates them: “He’s the only God.” “Somebody who forgives.” “He guides you.” Central to the plaque’s descriptions is the Muslim name for God: Allah. “He’s your God and my God,” he says quietly. Adjacent to this plaque is an award of appreciation; its Japanese characters express appreciation from the College of Dental Medicine Kaoshiung Medical University for Dr. Torabinejad’s “lectures on clinical applications of MTA”

The principal investigator for dental uses of mineral trioxide aggregate (MTA), Dr. Torabinejad explains applications for this dental invention that have become standard treatment around the world. Used on pulp exposures, it triggers the body’s production of dentin. It shortens from many months to a few days the treatment of teeth with open apexes created by injuries. It repairs accidental perforations and replaces amalgam applications in endodontic surgery, causing regeneration rather than repair. MTA usage is only one of the many research projects that bear Dr. Torabinejad’s name. He has made professional presentations (200 plus) in more than 40 countries, his mastery of English an advantage wherever he goes. However, when the phone rings, he can adroitly switch into Farsi to assist a friend with educational issues.

Born in Kashan, Iran, Dr. Torabinejad attended local elementary and high schools. The oldest of five children, he credits his mother with providing remarkable support for her five sons. She was just 27 years old when the father of her children died. Mahmoud Torabinejad, the eldest, was 11 years old. “I had to grow up very fast,” he says. To enter higher education, he competed with 14,000 other applicants for 404 openings. He recalls his scores on Iran’s SAT-equivalent test. Among 404 acceptances, he was number 176. Influenced by an uncle who was a denturist, he chose dentistry. At the end of six years, he graduated in 1971, number one in his class at the University of Tehran, “toughest” of Iran’s five dental schools. By the time he had completed dentistry, he knew he wanted to teach and to pursue research. 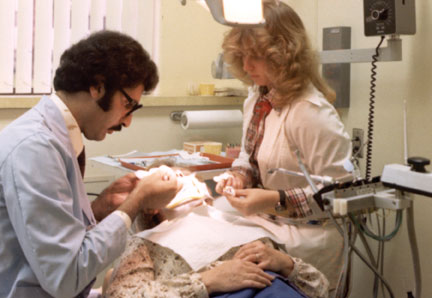 His search for advanced training in endodontics led Dr. Torabinejad the next year to enter the University of Illinois, where he earned certification in oral pathology. “Oral pathology,” he explains, “is a good basis for most clinical disciplines, and a good basis for endodontics and the research I was pursuing.” Moving to Seattle in 1974, he completed a master’s in dentistry at the University of Washington, received a certificate in endodontics, and welcomed Ashi from Iran as his bride.

Soon thereafter, while in research and teaching at Harvard University (1976-77), Dr. Torabinejad met Leif K. Bakland, SD’63, Ronald E. Buell Professor of Endodontics, at an endodontics meeting in Houston. That encounter would lead him to choose Loma Linda University from among several schools that were recruiting him for a teaching/research position. That decision led to the development of a deep bond with Dr. Bakland as a colleague. “He is like my own brother,” says Dr. Torabinejad.

His next-door office colleague, Robert Handysides, SD’93, chair, Department of Endodontics, calls Dr. Torabinejad “the consummate educator as well as a globally recognized leader in the field of endodontics,” adding, “his passion for endodontics is contagious. I am honored to be able to work so closely with him.”

Enjoying collegial ties with both practicing dentists and students—Dr. Torabinejad directs many residents’ research projects—has not prevented Dr. Torabinejad from maintaining family and professional connections in his homeland. His mother, now 84, welcomes his visits. Dr. Torabinejad has found, however, a promising patient population in Iran for clinical research purposes. “At LLUSD, we have a fluid patient population,” he explains. “In Iran, we have access to a more stable population,” important for longitudinal studies. With his encouragement, the Mahmoud Torabinejad Clinical Research Center is now operating in Isfahan, Iran. He and LLUSD Dean Charles Goodacre, SD’71, MSD, were present when the Center opened in March 2011.

Offered positions in many places, this author of two textbooks (one the world’s most popular endodontic textbook) has achieved eminence as a teacher and scholar. Why does he remain at LLUSD? Because of the environment, he says, especially its values and objectives.