It will be a relief to those holding their breath since April 20 that a new name for the School of Dentistry’s alumni journal finally has been chosen.

“[D]esigned to inform alumni, faculty, students, and other interested individuals regarding current School programs, events, and activities and accomplishments of faculty, students and alumni,” the alumni journal was launched in very early 1988 as Dentistry, under the founding editorship of Leif K. Bakland, DDS, professor emeritus, Department of Endodontics.

The name Dentistry had the benefit of being discipline relevant, direct, and difficult to confuse. But most likely due to its generic obviousness, it is also the name used by three other American dental school alumni journals. The title, font, and cover design of one of those other Dentistry journals left it at first glance perfectly confusable with our alumni journal (see below). 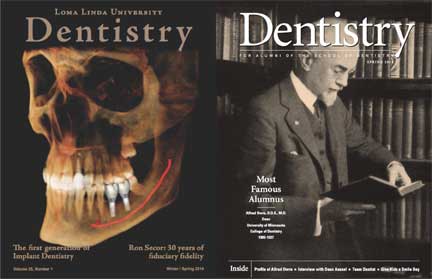 To distinguish the School’s alumni journal more obviously from these others, a new name was pursued in April employing a week-long contest during which the School’s students, staff, and faculty could submit, by 1:00 pm Monday, April 20, as many names as occurred to them. The Office of Marketing offered $75 worth of LLUSD logo gear as prizes to the winner (and a consolation item to the runner up).

The contest announcement advised contestants to submit titles with a dental denotation that comfortably would follow LLU, or LLUSD—such as, LLU AMALGAM. (If it weren’t for the fact that a small subset of dentists—and a substantial percent of the general population—are concerned with the mercury component of amalgams, the word would have been a prime candidate, given its metaphorical allusions to diversity, strength, and cohesion.)

Preempted were words that are unique to one dental specialty or another, and titles already in use such as “Impressions” (used by three dental schools), “Bridge,” and the very artful “Caementum.” A small list was provide potential contestants of names that had been rejected already by the School’s administrative council: Alembic, Amalgam, Apex, Arch, Bite, Canker, Composite, Eruption, Maxdible, Margins, Mouth, Nerve, Occlusion, Pontic, Profusion, Restore, Root, Retain, Transitions, Vanguard, and Vision.

By Monday’s deadline, the marketing department had received 162 submissions from 50 different contestants. From these 162 names, the marketing staff chose nine potential titles from which the School’s administrative council was asked to decide a winner.

On Monday, July 20, the decision was made to select a variant of “LLUSD Articulated,” a variant that was submitted jointly early during the contest week by Carole White, assistant to the dean, and Shelley Console, academic assistant 2, Office of the Dean, now alumni journal renaming contest co-winners. 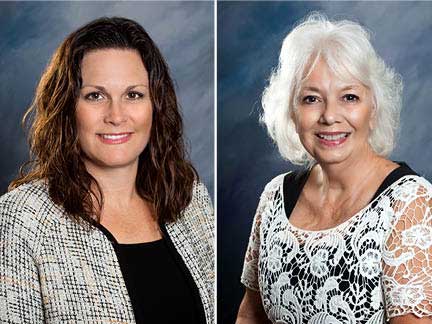 Articulator denotes a primary tool of the dental profession that enables the practitioner to diagnose the state of the patient’s occlusion, plan dental procedures, aids in the fabrication of restorations and prosthodontics replacements, and makes it possible to accomplish most of the prosthetic work apart from the patient.

Articulator has another meaning:  words meaningfully arranged or intelligible, words that concern clear and effective utterance—what a house organ or “mouthpiece” should do.

And Articulator has a third, congenial connotation of united segments, or components, that the oral health care ideally practiced implies in both its occlusions and in relationships with peers and patients.

The Office of Marketing thanks so many of you for your participation in the effort to rename the alumni journal, and congratulates Carole White and Shelley Console for submitting the winning name, and to runner-up Tory Silvestrin, DDS, MSD’15 (endodontics), MSHPE, assistant professor, Department of Endodontics, who submitted the same name but later than Ms. White and Ms. Console.