Skip to main content
By School of Dentistry - August 6, 2014

Robert Fritz, DDS’75A, joined the LLU School of Dentistry Department of Restorative Dentistry as an assistant professor in October 2013. With a major assignment in the clinic, he finds himself wanting to emulate the teachers who helped him when he was an LLUSD student. He cites the example of the late Dean Judson Klooster, DDS, whose membership in the Academy of General Dentistry prompted him to join that organization in 1976. Dr. Fritz became a fellow of the Academy in 1982 and later joined the Academy of Dentistry International. He subsequently served on various boards in the Southern California Academy and in the California Academy of General Dentistry where he has met many dentists in leadership positions. 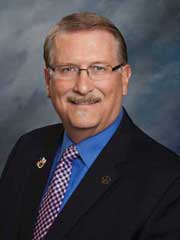 As a dentist Dr. Fritz treated his first patients in 1975. He began as a six-month associate dentist in Lancaster, California, while commuting part-time to his growing practice in Camarillo, California, where he practiced for 28 years. For clinical professionalism he relied on his fine dental education but, as he says, “I didn’t know what I didn’t know about the business side of things.” He very much affirms the current curriculum that considers the business side of dentistry.

There’s no doubt, however, that Dr. Fritz honed personal business skills during an appointment to manage a dental group at a federally qualified health care clinic in Visalia, where he served as vice president of dental affairs. A move to the Fresno-Visalia area is a significant part of Dr. Fritz’s story.

He was at home with the Fritzes’ two children in Camarillo on September 11, 2001, when he learned of the 9/11 attack. The night before, his wife Debbie had flown out of LAX on an American flight to New York. Hours later he learned that though marooned in New York she was not on the targeted plane. Days later, as a flight attendant on the first plane booked to leave the airport, Debbie (and the captain) reported the passenger list to American Airlines. Officials in Dallas identified four FBI most-wanted terrorists on board. Being alerted by the FBI, a SWAT team stormed the plane from the front and back, escorting the terrorists off the plane. In the aftermath, with Debbie on a stress-related leave and no longer needing to commute to LAX, the family moved to Fresno.

For the only time in his life, Dr. Fritz encountered a religious discrimination issue in Fresno. Following an extended health related leave, he became the subject of harassment for early Friday afternoon departures from work to observe the Sabbath, in spite of an agreement reached during his initial employment interview. When he was repeatedly harassed, he sought support from California’s Fair Housing and Employment Department and from the legal department of Pacific Union Conference of Seventh-day Adventists. Perseverance (a two-year ordeal) ended in a favorable settlement for Dr. Fritz, but no doubt made him more open to an offer from Dean Ronald Dailey, PhD, a classmate from Glendale Academy, to consider an appointment to his alma mater.

Dr. Fritz applauds advances in dentistry and dental education. “Dentistry is developing more and more in this digital age,” he notes. “The lab side of things is changing drastically with technology. X-rays are greatly improved from the dark images I once looked at.”

In his teaching role, Dr. Fritz is emphasizing prevention, “the best approach to keeping you healthy.” And he adds with conviction, “I believe God has placed this School here for a purpose.”