Many years ago, two young dental graduates, Richard Parker, SD’68, and Franklin Ordelheide, SD’68, accepted mission appointments to the island of Guam, ready and willing to use their new skills on the local Chamorro people. The year was 1968, and the P&O teams were the second and third dentists at the newly established Guam Seventh-day Adventist Dental Clinic. Now, some 43 years later, their sons, Chad Ordelheide, SD’04, and Scott Parker, SD’08, are ‘crowning’ and ‘implanting’ their dads’ patients in the same clinic. 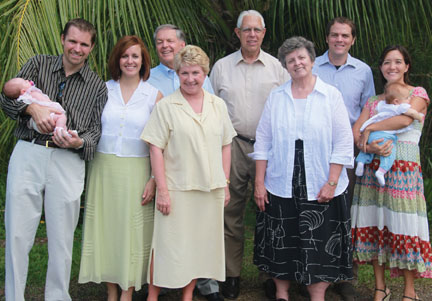 The dental depart­ment of the Guam SDA Clinic began in 1966, when Dr. Wiley Young acquired and installed some antique dental equipment in the two oversize closets he used as his operatories. Many alumni may recognize Dr. Wiley’s name, as he helped establish many clinics and shared his skills around the world.

Guam has always had a large U.S. military presence, but when the P&O team arrived, its 50,000 civilians had two dentists, and one of them was the acting governor of the is­land. Dr. Young had left earlier, so when Drs. Parker and Ordelheide opened their door for business, they had plenty of patients, plus an instant waiting list which hung over their heads for the next four-plus years.

“Looking back,” they say, “it was amazing that we were able to function in our small quarters,” but they were “promised” a new clinic soon, so worked a split schedule and kept the doors open six days a week. Although they sat next to each other in the dental school lab for four years, and then lived on Guam as neighbors for several years, they could never explore Guam together on Sundays, because one of them was always working.

Fortunately, the SDA Clinic stuck to its word, and opened its doors to a new state-of-the-art facility in 1970. With six operatories, additional dentists worked various shifts to maximize its use. Over the years it has evolved and it now has five hygiene and eight dental operatories.

Shortly after the dental department moved, the cramped medical portion of the clinic was also able to move to an adjacent new building on some thirteen acres of land.

Dr. Parker practiced in Guam for five years and then taught at the Medical College of Georgia for four years. Re­turning to California, he taught at Loma Linda University School of Dentistry for 18 years before continuing his present full time dental practice in Calimesa, California. Besides teaching, Dr. Parker has been very active in sponsoring and participating with students on their service learning missionary trips. He and Bonnie now reside in Yucaipa, California.

The Ordelheides worked on Guam for four years and then in a “free agent” exchange of dentists, the O’s went to Hong Kong Seventh-day Adventist Hospital Dental Clinic and Dr. Wayne McFarland and family came to Guam, where he could educate his children at the local academy. The Hong Kong practice boomed, and soon Dr. Ordelheide’s classmate, Virgil Erlandson, also SD’68, joined him. After practicing a few years in the states, the Ordelheides accepted a call to the dental clinic in Blantyre, Malawi, Africa. For the next six years, Dr. Ordelheide worked with Ken Pierson, SD’71, and Les Bergstrom, SD’72. Dr. Ordelheide is retired in Oakdale, California.

The current Parker/Ordelheide Guam teams recently gave birth to baby girls, Zoe and Ashlyn respectively (now one-year olds); thus the occasion for the photo op with the grandparents seen on this page. Life on Guam, though considerably modernized from the 1968 days, continues to offer a slower paced island lifestyle that the current families enjoy. Presently, scuba diving and photographing the reefs’ small wonders are the popular spare time adventures, and “if you didn’t get a picture of it … you didn’t see it.” Of course easy access travel to Asia, Australia, Japan, and Philippines is an added bonus.

Dr. Chad Ordelheide, and his wife Shoshanna, DH’03, have been on Guam for six years. Dr. Scott Parker has been there two years. His wife Erika, LLUSM’04, practices family medicine at the clinic. The need continues for dentists and hygienists who would like to serve overseas.