Wayne K. Tanaka, DDS, associate professor, Oral and Maxillofacial Surgery, was the recipient of the School of Dentistry’s 2013 Teacher of the Year Award. The honor was presented to Dr. Tanaka at the School’s most recent commencement service by then Dean Charles Goodacre, DDS’71, MSD, along with the following remarks. 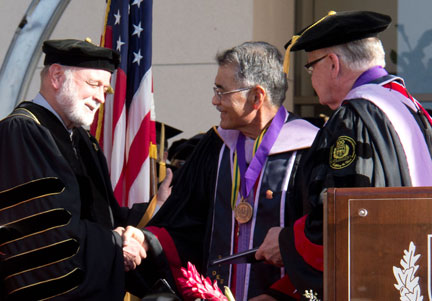 “After earning a degree in dentistry and subsequently completing a postdoctoral residency in the United States Air Force (USAF), Dr. Wayne K. Tanaka was awarded a certificate in oral and maxillofacial surgery in 1983 while serving in Wilford Hall USAF Medical Center at Lackland Air Force Base in Texas.

“During his twenty-year military career (1977-1997), Dr. Tanaka rose to the rank of colonel while serving in positions that reflected his increasing professional responsibilities: general dental officer; oral and maxillofacial surgeon; chief of oral and maxillofacial surgery (OMFS); command dental consultant in OMFS: and chair, departments of OMFS on military bases in the United States—Arizona, California, Nebraska, and New Mexico—and in Okinawa, Germany, and Japan.

“In March 1993, Dr. Tanaka joined the Department of Oral and Maxillofacial Surgery at Loma Linda University School of Dentistry as an assistant professor on voluntary status. He served in his capacity until June 1995, when he was transferred to a USAF base in Nebraska.

“Upon retiring from the military in December 1997, Dr. Tanaka returned to the School of Dentistry as an associate professor in the Department of Oral and Maxillofacial Surgery. In 1998, he was appointed director of the OMFS predoctoral program and acting chair of the department. He was subsequently renamed department chair then program director.

“In addition to his professional contributions as practitioner, teacher, and administrator, Dr. Tanaka has also shared his expertise through publications and presentations. Known for his dedication to the University’s motto, “To make man whole,” he finds pleasure in teaching and is noted for his careful critique of clinical work and his personal attention to students who seek his help.

“In recognition of and appreciation for his contributions to the dental profession and for his commitment to the education of students, the School of Dentistry is pleased to present to Dr. Wayne K. Tanaka the School Distinguished Service Award.”