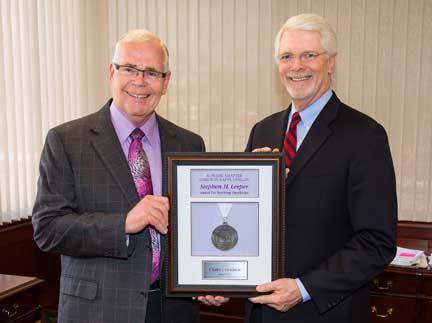 The annual honor recognizes an individual who has shown innovation in teaching and significant contributions to dental education at their center of oral health care instruction as well as to the entire dental education community.

After graduating from dental school, Dr. Goodacre completed a three-year combined program in Prosthodontics and Dental Materials at Indiana University School of Dentistry where, in 1974, he earned his MSD degree.

In announcing Dr. Goodacre’s award, OKU abstracted his professional and pedagogical contributions to dental education in general and prosthodontics in particular:

Dr. Goodacre served as editor of the International Journal of Prosthodontics for ten years.  He has over 100 publications and has given more than 400 invited presentations.  He has been a principal investigator or co-investigator on twenty-four externally funded research grants.  Since 1974, he has maintained a part time private practice limited to prosthodontics since 1974.

He is a founding board member of the Foundation for Oral Rehabilitation (FOR.org) and serves as a consultant for Global Dental Sciences, the company that developed and introduced the first totally digital process of fabricating complete dentures and implant prostheses.