Skip to main content
By School of Dentistry - July 24, 2012
Recently, David James Saad, SD’89, PG’94, dental   anesthesia, was featured in the Chico Enterprise-Record (April 15, 2012) for a three-week dental service providing trip he took with his wife Julie, CPA, MBA, under the auspices of the National Association of Seventh-day Adventist Dentists (NASDAD) to the Maasai Dental Clinic, five miles from the Maasai Mara National Game Park, a wilderness area and game preserve in southwestern Kenya, famous for its big cats. 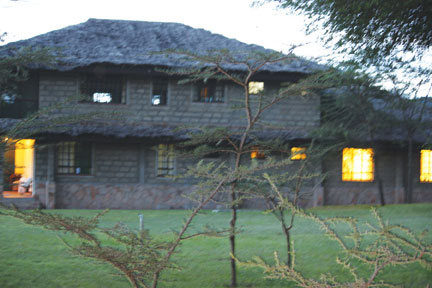 The Maasai Dental Clinic at dusk
The clinic, comprised of three fully equipped dental operatories, provides free dentistry five days per week. While it employs a staff of local Maasai, the clinic’s dentists are volunteers who spend a few weeks at a time, on a rotating basis, mostly from the United States and England.
Despite the rather modern nature of the clinic, it is surrounded by a Maasai population of approximately 50,000 that lives in mud huts. "The men carry spears or sticks to defend themselves and their cattle against lions, leopards, and snakes," says Dr. Saad. Although the Saads stayed in a convenient apartment above the clinic, because of the danger of lions and other wild animals, they could leave the compound—surrounded by an electric fence—only when a Maasai driver was available to transport them. 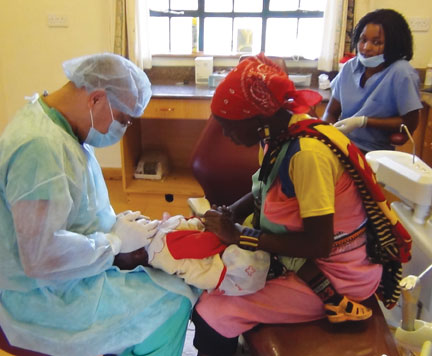 Knee-to-knee exam of a toddler with dental trauma
Dr. Saad was able to see roughly 15 patients each day, treating infections and extracting many teeth from people who had walked as far as 30 miles to the clinic.
According to Dr. Saad, the oral health of the Maasai is dismal for several reasons. They do not brush their teeth, and they eat roots that are rough on their teeth. Furthermore, because their water contains toxically high levels of fluoride, the population suffers from an enamel damaging disease called fluorosis—some of the worst cases he’d ever seen. 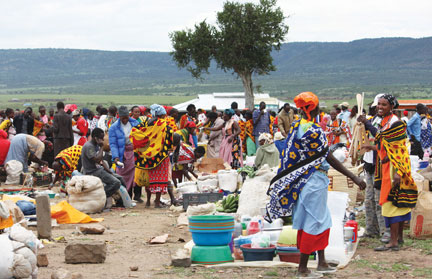 Maasai open-air market
Over the past 23 years, Dr. Saad has made dental mission trips to many parts of the world, including Haiti, the South Pacific, and Mexico. In Haiti, he had patients sit on a rock “in the middle of nowhere,” and someone held a flashlight while he extracted teeth to provide pain relief.
As a pediatric dentist, Dr. Saad has a special concern for the many children who have been brought to him for treatment on his overseas mission trips. And after his November 2011 experience in Kenya, he says he would like to return and start an oral hygiene program for the Maasai children.

Father and son patients sit with their dentist.
Dr. Saad believes “that mission work and being the extension of God’s hand to alleviate suffering anywhere in the world is what truly defines LLU. I am blessed to be able to be a small part of the army of Loma Linda graduates who do their part.”
Dr. Saad completed his undergraduate degree at Walla Walla University in 1983, with majors in religion and biology, and then spent time participating in medical research before deciding to pursue a career in dentistry. After graduating from Loma Linda University School of Dentistry in 1989, he remained as a part time faculty member for three years before entering the School’s Advanced Education Program in Dental Anesthesiology from which he earned a certificate in 1994. 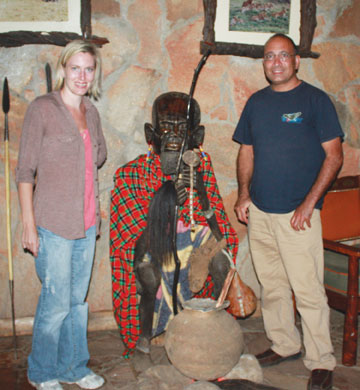 Dr. and Mrs. Saad pose with Maasai shaman.
Raymond S. Damazo, DDS, and his wife Gail, built the Maasai Dental Clinic in 2008 within the legal auspices of the nonprofit World Health Dental Organization (WHDO). In 2010 WHDO turned over leadership of the clinic to NASDAD which operates the clinic in partnership with Loma Linda University for the School of Dentistry. 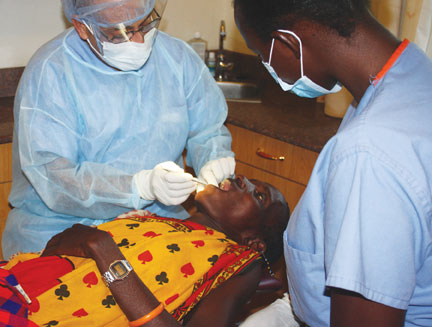 Dr. Saad and indigenous assistant treat a patient.
The Clinic is becoming an international teaching center with one faculty member and two senior students cycling through most of the time. LLUSD seeks volunteer dentists to work with students as adjunct faculty members. It is possible to apply for adjunct faculty member status and be preapproved for a mutually agreed work schedule. Volunteers, such as Dr. Saad, are needed throughout the year. For more information, Kirk Hunt, SD’67 (who coordinates the volunteer schedule), may be reached at:

Dr. Saad highly recommends the satisfaction he has found in mission dentistry to colleagues who have never had the experience.