Endodontic instruments are continually at the forefront of discussion among general practitioners and endodontists alike. We are easily intrigued with the latest and greatest in gadgets and equipment. The proverbial saying of "he with the most toys wins" appears to be very relevant to the endodontic field. With what seems to be the annual addition of more file systems and means of cleaning and shaping the canal morphology, basic foundational principles of instrumentation are often overshadowed in favor of integrating new technology. The purpose of this paper is to explore historically where endodontic instrumentation began, and where it now stands in the developmental journey of endodontics. In addition this article will review foundational principles of instrumentation applicable to whatever instrumentation technique the clinician should choose to utilize. 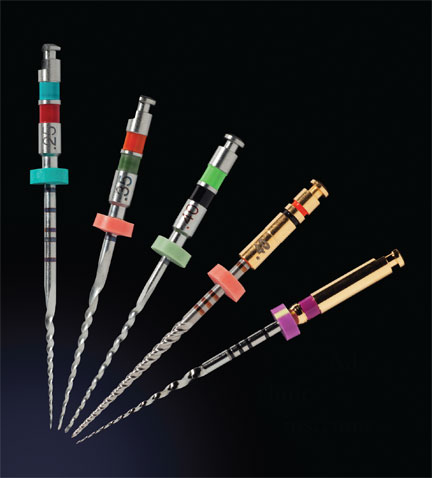 Historically dental pain and its management have been well documented. Some of the oldest recorded information we have regarding toothaches comes in the form of ancient Anastasia Papyrus and Chinese documents. The first mention of a "tooth worm" theory was found in the Anastasia Papyrus of the thirteenth century BC.1 This theory hypothesized that the invasion of worms into the tooth via a cavity was what created dental pain. According to Tsai Fang, "The oracle bone inscription, dated to the Yung Dynasty (14th century BC), clearly shows a Chinese character whose meaning is interpreted as caries."2 By the year 200 AD, the Chinese were using arsenic compounds to treat pulpitis, preceding the Europeans and Spooner by 1,600 years.2 The first documented case, however, of instrumentation inside a tooth comes from the skull of a Nabataean warrior (200 BC).1 A radiographic examination of the skull revealed a 2.5mm bronze wire in the root canal of the maxillary right lateral incisor. One explanation of this primitive endodontic procedure was to prevent "tooth worms" from burrowing into the teeth and creating further pain. In the mid 1700s, Pierre Fauchard was recommending the removal of diseased pulp tissue as a form of treatment. Dr. Louis I. Grossman, in his 1976 JADA article, described extensively the role of endodontics during the preceding 200 years.3 It appears that it was not until the late 1800s and early 1900s, with the development of anesthetics, antisepsis, and radiography, that the use of endodontic instruments also emerged.

Initially there were two types of endodontic instruments. The endodontic file was to be used in a push/pull rasping motion, and the endodontic reamer was to be used in a rotating/twisting motion. Prior to 1957 these files came in six sizes conveniently labeled 1-6. The problem was that there was no standardization of the sizes of instruments, and definitely no standardization among manufacturers. In 1904 the Kerr Company had come up with the original design of instruments but no major changes had occurred since then. In 1957, John I. Ingle* and others issued a plea to the profession and manufacturers to standardize endodontic instruments. A Swiss company, Maillefer, picked up on the challenge, and the newly designed instruments were designated the "International Standard" by the International Standards Organization. Standardized instruments were designated in sizes 10 to 100. A file sized 100 has a tip size of 1mm and a file sized 10 has a tip size of 0.1mm. The taper was standardized so as to increase at a fixed rate. It was decided to increase the diameter of the file by 0.02mm starting at the tip of the file and increasing every mm of flutes up the shank of the instrument. Hence we have our 0.02 tapered ISO standardized hand instruments of today.  Upon the completion of the ISO standardization, changes once again stagnated and occurred only slowly for a number of years. Initially there was a change from carbon steel to a stainless steel, but little changed in terms of design. Then a new metal alloy was introduced into the field of dentistry, and the innovations in endodontic file designs accelerated.

Walia in 1988 was the first author to describe the use of a metal alloy called nitinol in endodontic instruments.4 The name "nitinol" was derived from nickel, titanium, and the Naval Ordinance Laboratory and was first described in a review article by Buehler and Wang for oceanographers.5 Today, in the endodontic literature, the name has been shortened significantly and instruments containing the nitinol metal are referred to as NiTi instruments. When comparing nitinol to stainless steel, Walia described the properties known at the time that included increased elastic flexibility and superior resistance to torsional fracture. Subsequent to the publication of this original paper on the basic properties of this unique alloy, much research has been done on NiTi files. Many aspects have been investigated, including the metallurgical properties, fatigue, and torsional strength, as well as separation, distortion, and surface treatment of an instrument. The amount of information on this topic is vast and accumulating.

When evaluating a NiTi instrument, clinicians must be familiar with some basic properties of the instrument design. Because numerous designs and properties are available with the various instrument systems, it is important to understand these differences and how they affect the instrument. What follows reviews a few of these characteristics.

A cross section of the instrument reveals certain characteristics. A radial-landed instrument has a flattened aspect on the external aspect of the flute (Fig 1), whereas a non-landed instrument does not (Fig 2). While all files, if used improperly, can create challenges in maintaining a natural canal shape, a radial-landed instrument tends to stay more central in the canal space because of the flattened portions pressing against the lateral aspects of the canal walls. A non-landed instrument tends to cut the tooth more efficiently, but distortion of the canal is a much greater problem, especially for the less experienced clinician. This distortion of a canals shape tends to lead to iatrogenic mishaps such as straightening of canals, apical transportations and perforations. Proper attention to details must be maintained regardless of the type of instrument used. 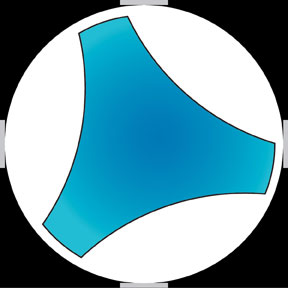 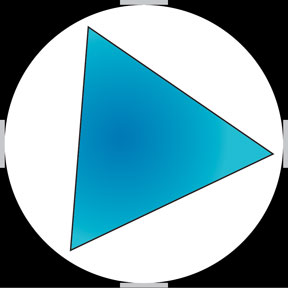 Another consideration in instrument selection deals with taper, defined as a gradual diminishing of thickness in diameter or width in an elongated object.6 When the term is used with endodontic files, it typically applies to an increase in thickness/diameter/width from a standardized file tip size as it progresses up a file’s shank/flutes. Various tapers exist in all file systems. Most instrument tapers are fixed, meaning they increase at a standardized, consistent rate from the tip of the file up to the end of flutes. These fixed taper file systems range from 0.02mm taper to 0.12mm. Some of the newer instruments have a variable taper built into the instrument. Thus within a single instrument the taper varies, sometimes starting at a specific taper and then altering the tapers as it travels the shank so as to improve efficiency in its cutting. An example of this would be a ProTaper Shaping file SX instrument by Dentsply International. Understanding taper is an essential component for predicting final shapes and sizes of canals. The canal shape and size will ultimately be determined based on the anatomy of the tooth, the canal system being instrumented, and the clinician’s decision about the canal’s final configuration.

Flexibility and stiffness of a file are primarily derived from the size of an instrument’s core. The thinner an instrument’s core, the more flexible the instrument will be. Flexibility is a cherished characteristic allowing files to follow the natural curvatures and irregularities of a canal system. As with most characteristics, there are positive and negative aspects. The down side to a flexible and thin core is that a file with these features has less torsional strength. This was clearly shown in an article by Xu et al. in 7 While various designs and fluting styles may disperse and distribute some of the torsional stresses better and more evenly, the size of a core is relevant in regard to its fracture potential. The thinner the core the more likely it is to succumb to torsional fracture.

Rake angle refers to the cutting edge of the flute file. It has long been a goal of instrumentation to be as efficient as possible. Having a "positive" rake angle makes for a sharper cutting instrument and one that more efficiently shaves off dentin. A negative rake angle occurs when an instrument scrapes the wall rather than cutting into it. Figures 3 and 4 represent configurations of a positive and negative rake angle. Figure 3 is a representation of a K3 file and figure 4 is representation of a Profile cross section. An interesting study by Kum et al. compared the amount of smear layer produced; and they found that the Profile instrument produced more of a smear layer than did the 8 While both instruments produced a smear layer, no clinical relevance can be inferred from this study. It makes sense that it is more efficient to cut than scrape a surface, yet aggressiveness needs to be counterbalanced with safety in the amount of tooth structure that is removed. 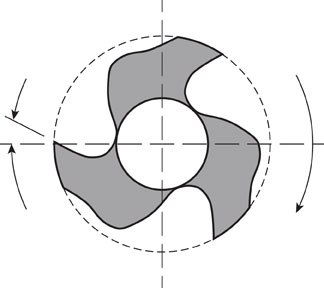 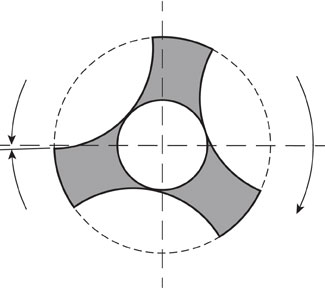 While the sharpness and cutting abilities of early hand instruments were top priorities, in the 1980s the sharpness of a tip received attention. Although the sharper instrument tip is more effective in penetrating and cutting dentin, it also leads to more iatrogenic complications. These complications include the common clinical difficulties, such as the potential of ledging, canal transportation, and perforation. In the mid eighties, Roane, followed by Powell, started to modify the tips of K-files by "grinding to remove the transition angle" from tip to first blade.9, 10 The articles showed that while the modifications made cutting of the dentin less efficient, the files stayed more centered within the original canals and cut all sides more evenly. Many rotary instruments today have both a cutting and a non-cutting tip, and this point is important to a clinician when deciding which instrument to use. When using a slightly less aggressive tip, there is less likelihood of an iatrogenic mishap and an increase in safety of the procedure.

All of these developments and changes in our instruments have taken place during the last few decades. The reason for these efforts to improve endodontic instruments relates to one of the foundational principles in endodontics: canal debridement and disinfection, sometimes better known as cleaning and shaping. The major objectives of cleaning and shaping involve locating all of the canals inside a tooth, obtaining a straight-line access to these canals, and removing all the pulpal tissue remnants while conserving tooth structure. Shaping is an essential component of canal preparation. The instruments provide the shape while the irrigants cleanse and disinfect. If an inadequate shape is produced, it greatly diminishes the effectiveness of the cleaning effort and complicates the filling of the canals. Schilder,11 in his classic article, outlined the principles of shaping as developing "a continuously shaped conical form from apical to coronal. The apical preparation should be as small as is practical and in its original position spatially." This continuous flow, from apex to chamber, facilitates the irrigation process and allows for better cleansing of the canal system without the removal of excessive tooth structure. When talking about instrumentation one sometimes gets caught up in the technology and forgets the biological principles of disinfection. While technology has progressed to facilitate the instrumentation and shaping component, it is important not to forget the importance of irrigation. It is the copious lavage with the various irrigants that leads to maximum success.

* On a side note, we are honored to have Dr. Ingle as a faculty member in the Department of Endodontics at Loma Linda University. Thank you, Dr. Ingle, for all you’ve done for the specialty and for dentistry.

5. Buehler SJ, Wang FE. A summary of recent research on the nitinol alloys and their potential applications in ocean engineering. Ocean Eng 1968;1:105-20